Analyze the role of the judicial branch in Georgia state government.
a. Describe the ways that judges are selected in Georgia.
b. Analyze the dual purpose of the judicial branch: to interpret the laws of Georgia and administer justice in our legal system.
c. Explain the difference between criminal law and civil law.
d. Explain the steps in the adult criminal justice system beginning with arrest.

Teachers may choose to use the content concerning the number of courts, jurisdiction and responsibilities as information to supplement teaching this element. However, students are only responsible for describing the ways judges are selected in Georgia. 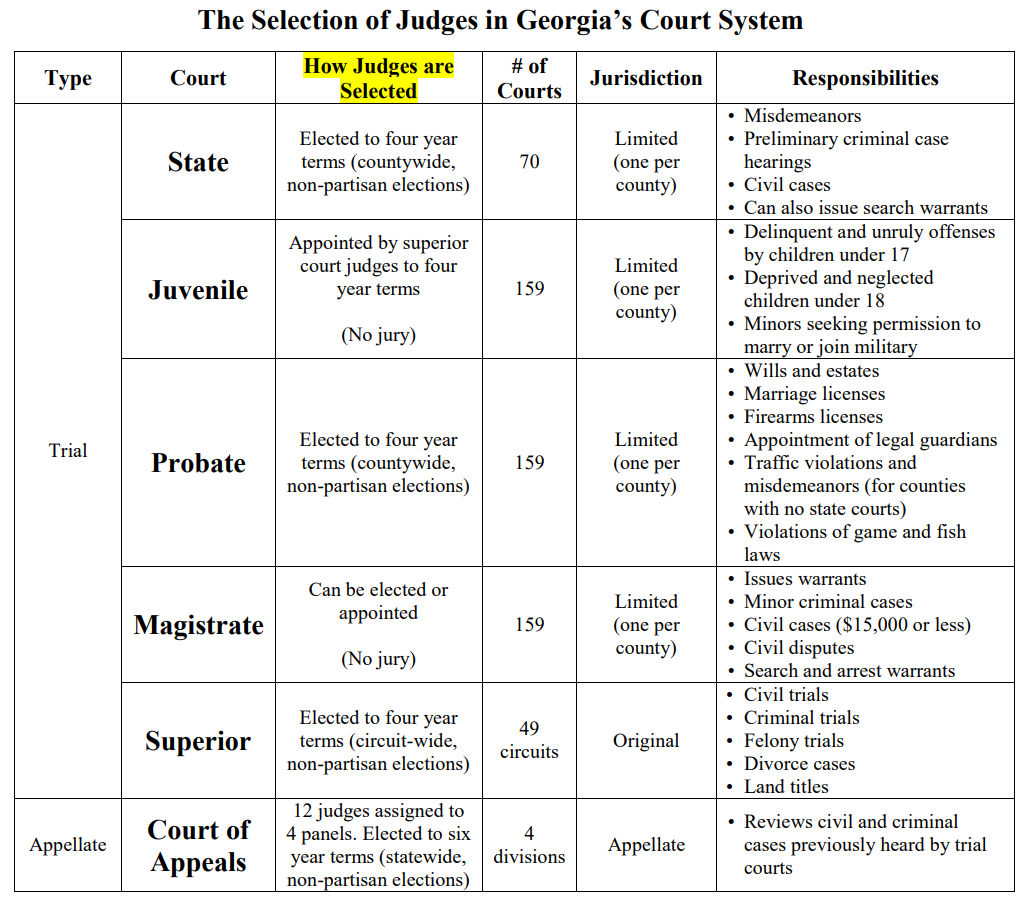 While all courts in the judicial branch play a part in ensuring justice in our legal system, the Supreme Court plays the most important role by interpreting laws enacted by the legislative branch. The Supreme Court accomplishes this by reviewing court cases that challenge the laws. If the Georgia Supreme Court rules that the law is unconstitutional (not supported by the Georgia or U.S. Constitution) then the law is struck down. Though the Georgia Supreme Court is the highest court in Georgia, any decision can be brought to the U.S. Supreme Court for appeal. The power to interpret laws is one of the checks that the judicial branch has over executive and legislative branches and is a way to protect against “bad” laws and ensure justice for all of Georgia’s citizens.

The state of Georgia administers justice by prosecuting many kinds of federal crimes, including terrorism, human trafficking, white collar and cybercrime, civil rights violations, identity theft, gang violence, child exploitation, and large-scale drug trafficking cases. The justice system aggressively investigates and prosecutes corruption by those in public office, government service, and corporate boardrooms. The system engages in prevention efforts to educate citizens about public safety threats, deter students and adults alike from turning to criminal conduct, and provide ex-offenders with an intensive re-entry program after they complete their sentences of imprisonment.

Criminal Law deals with laws that are created to protect society from wrong-doers. Crimes are serious offenses that are punishable with fines, community service, prison, and sometimes even death. The majority of citizens understand more about criminal law than civil law.

A person can be charged with both criminal and civil wrong doing for the same action. For example, a person can be acquitted of murder in his/her criminal case and can also be found guilty of wrongful death and ordered to pay damages in his civil trial.

The adult justice system is divided into civil and criminal law. In the case of criminal law, offenses are categorized into felonies and misdemeanors. Felonies are serious crimes such as arson, murder, rape and grand theft. The minimum sentence one can receive for committing a felony is no less than one year in jail. Felonies that can be punishable by death are called capital crimes. In Georgia, capital crimes include murder, kidnapping with bodily injury, aircraft hijacking, and treason. Misdemeanors are less serious crimes and are usually punished with less than a year in prison and a fine. Some misdemeanors are assault and battery, cruelty to animals, shop lifting, and trespassing.

There are several steps in the criminal justice process. If an adult commits a serious enough crime, they can go through two processes. The first is the pretrial and the second, if needed, is the trial. Below are the steps for the pretrial process with a brief description of each.

Pretrial
Trial
If the suspect (now the defendant) pleads not guilty in the arraignment then their case will go to trial. Below are the steps of the trial process.

Nothing yet. We shall see...
​​Chad J. DeWolf is an educator and coach at Madison County Middle School (Comer, GA) in the Madison County Charter School System (Danielsville, GA). This website is NOT affiliated with MCMS or MCSD. ETS is used as an educational tool for anyone interested & should be viewed as a resource for an awesome online learning experience. Tell your friends. You know you want to. Everyone is doing it...