Analyze the role of the legislative branch in Georgia.
a. Explain the qualifications for members of the General Assembly and its role as the law-making body of Georgia.
b. Describe the purpose of the committee system within the Georgia General Assembly.
c. Explain the process for making a law in Georgia.
d. Describe how state government is funded and how spending decisions are made.

CG2.d - How State Government is Funded & How Spending Occurs 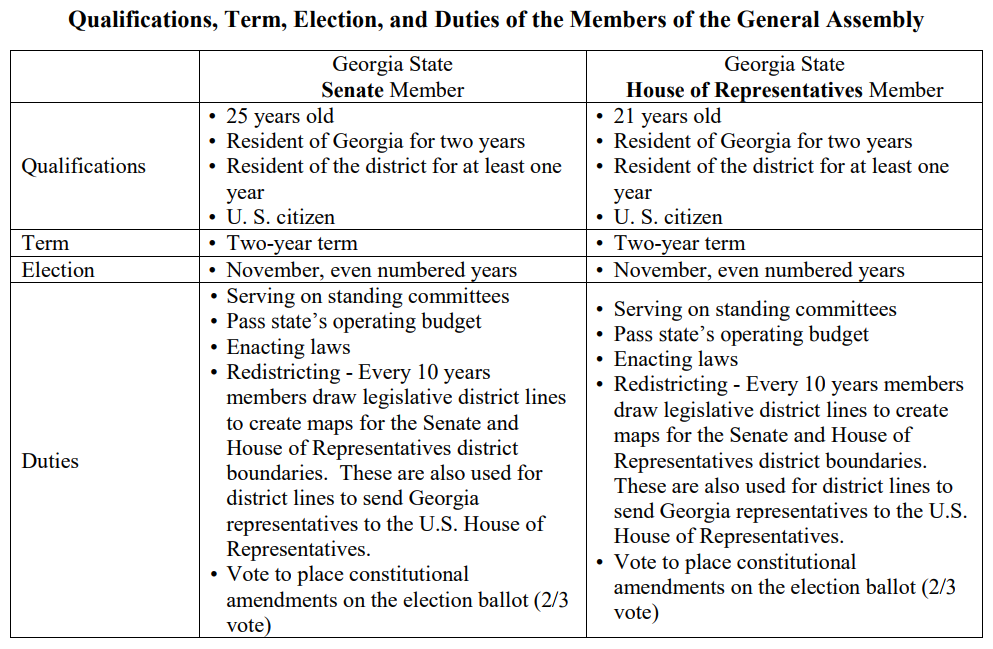 The primary function of the General Assembly is to make the laws that govern Georgia. This involves the proposal of legislation, committee consideration, and finally action by the full house—a series of steps that have to be repeated in both houses.

The Organization of the General Assembly - the House of Representatives

There are three other leaders in the General Assembly. This includes the Majority Leader, the Minority Leader, and the Floor leader. As the name implies, the Majority leader is responsible for making sure its members vote for the bills and agenda that majority party favors and the same is true for the minority leader. The Floor leader’s role is to promote the interest of the Governor on the house floor.

The Organization of the General Assembly - the Senate

There are four types of committees in the General Assembly. These are:
GSESS8CG2.c

It is a complex and lengthy process for the legislative branch to fulfill its role as the lawmaking body for the state. The 16-step process is outlined below. Bolded information is included to provide a basic understanding of the lawmaking process for students.

A legislator introduces an idea for a law (this could be based on the needs of his or her constituents, suggestions made by the Governor or Floor Leader, or his or her own ideas or beliefs).
GSESS8CG2.d

In order for the state government to function effectively, the government must generate revenue (money) to operate. This is necessary for many government-sponsored programs to meet the needs of the citizens of the state. The General Assembly determines the types of revenue sources and the terms by which they operate. The Department of Revenue, an agency of the state government, is charged with the responsibility of administering and collecting revenue while the governor, the state’s budget director, is also involved in revenue decisions.