Both county and city governments play an important role in the State of Georgia. Georgia’s 159 counties along with 535 cities and special purpose districts provide several services to the state’s citizens including education, law enforcement, and public transportation.

City Government. There are over 500 cities and towns in Georgia. Unlike other states, Georgia makes no legal distinction between a city, town, or village. This is because cities and towns are approved and incorporated by the General Assembly.

A city or town (municipality) is established by a Municipal Charter, a written document that sets up its governmental structure including the type of government, boundaries, and powers it will have. Some of the services a city may provide include police and fire protection, schools, taxes, and streets and water service.

County Government. Counties were created by a rural society that expected government to keep the records straight and to provide swift justice. To help counties administer state programs and conduct state courts, the state constitution originally created four elected county officers: the sheriff, the tax commissioner, the clerk of the superior court, and the judge of the probate court.

Due to the historically rural economy of Georgia resulting in few major cities, the county-based government system of Georgia has been a mainstay in the state. As such, Georgia has the second most counties in the United States (Texas is first). Georgia’s first eight counties were created in 1777 during the American Revolution. The 1983 Georgia Constitution set a limit for the amount of counties Georgia can have. Due to this cap, Georgia has a total of 159 counties in what is the 21st largest state in terms of land area. However, according to the New Georgia Encyclopedia, the most important benefit of having a large number of counties is that Georgia’s citizens have more representation in the state’s General Assembly. This is due to the fact that each county has at least one representative. One of the more colorful stories about why Georgia has so many counties is that the state set a limit on county size by declaring that any farmer living in the county should be able to ride by horse or mule to the county seat, conduct business, and ride back all within a day.

There are several positions that may be part of a county’s governmental organization. These include:

Through the years, cities and counties have had to decide on who provides services to avoid duplication of services. Some city and county governments have merged to consolidate and streamline services. Examples of consolidated city/county include Augusta - Richmond County, Athens - Clarke County, and Macon - Bibb County.

The following information is provided to better understand content, however, students are not responsible for this information.

There are three types of government a municipality may have. These are weak mayor council, strong mayor council, and council manager. The chart below offers more details about each of these forms of city government. 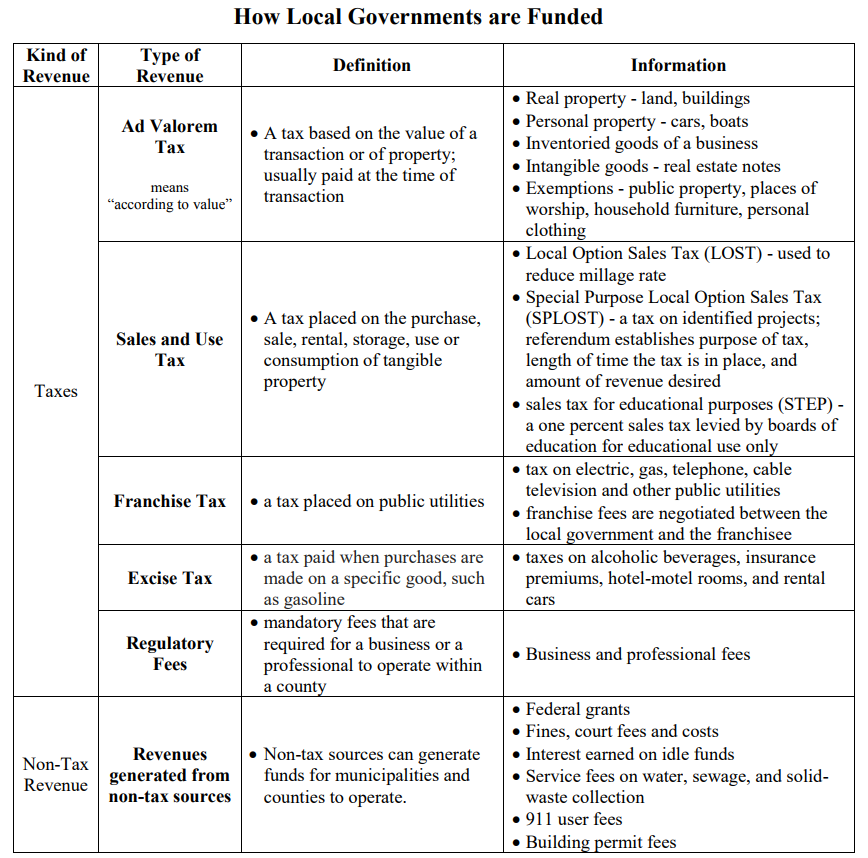 ​
​Spending decisions are based on the financial needs of the municipalities and counties. Spending decisions are impacted on availability of funds, as in Federal grants, and whether referendums are voted for by citizens. Economic influences, such as inflation, economic downturns, interest rates and competition among local ​governments, all can impact how revenue is generated and applied. Social and demographic change, population age and personal income shifts, can determine the use of revenue.